Discussion is one of the most widely used and valuable methods in the teaching of social studies. It represents a type of teamwork, based on the principle that the knowledge, ideas, and feelings of several members have great merit than those of a single individual. Lowman (1987) highlighted this view point that two types of teacher. Student interchanges are sometimes called discussion. In one side, the teacher gives students an opportunity to clarify content or ask for opinions on related topic. In the other, the teacher asks questions requiring specific knowledge of course content. In a discussion class the students are actively involved in processing information and ideas. Since student-initiated questions are more common in discussion classes, their needs and interests are dealt with more readily and spontaneously than in other methods as pointed out by Gage and Berliner, (1988:99) that discussion is a forum in which students can practice expressing themselves clearly and accurately, hearing the variety of forms that expression of the same idea can take, and criticizing and evaluating successive approximations to an adequate statement. 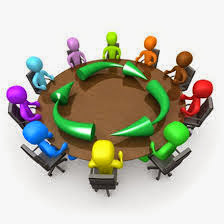 According from kind of discussion method above writer used group discussion as the method and used discussion technique from G. Sukadi (1997:86) It is: A. antecedent => moderator open discussion, telling direction and topic and also the target of which wish to be reached, introducing all participant, and also read off discipline B. Forwarding of idea => panelist finish idea, opinion, or experience as according to given time quota C. Free discussion => moderator arrange the way discussion of each panelist and also comments of each panelist D. Hearer participation => moderator please all hearer to tell opinion, comment, inquiring, or commenting. Panelist interrogated or answered to will give answer.