Defining variables
Variable is something that can be measured.Variable is defined as “characteristics that tend to differ from individual to individual, though any two or more individuals may have the same variable trait or measure”. (Charles, C.M, 1995:29).
Example:


Unclear variable
“School children achievement” is not clear because it can refer to any subject matter achievement. While beauty, it is not a measurable variable because it is difficult to get objective measures of “beauty”.

Continuous Variables
Continuous variables are variable that show gradational differences in the same trait processed by individuals (Charles, C.M, 1995:29). For instance, height, weight, and speed. The adjective modifier can be used to explain these variables. The word very, and more like very high, very fast, very tall, very big, or taller, bigger, faster. It can be used in the correlation research, like the correlation between reading strategies and reading comprehension. This variable cannot be used in causal designs to measure, for example, the effect of students’ reading skills to their writing.

Discrete variables
Variables are classified as discrete variable if they are naturally categorical, like sex or handedness which gives the choice of either male or female, right handed or left handed (Charles, C.M, 1995:29). This variable group people of the same traits. In sex we divide people into male and female group. Variable intelligence is not discrete variable although we can group people into high, medium, and low IQ. It is because the members of high IQ group still vary in their intelligence. Besides, intelligence can be modified into very smart, smarter, and the smartest. A variable cannot be discrete and continuous at the same time. Discrete variables can be used in causal designs to measure the effect of, for example, sex to the student’s achievement. 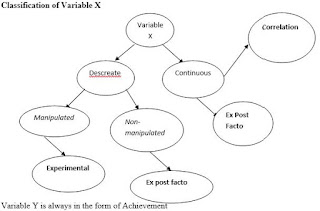 Confounding Variables
Confounding refers to interfering unexpectedly. Variables are considering confounding if their presence unexpectedly interfere research outcomes, and therefore needs to be controlled. The example is on causal research. As like, the female Junior high school students achieve better significantly in language learning than male Junior High School students may be intervened by unexpected variables like intelligence and motivation.