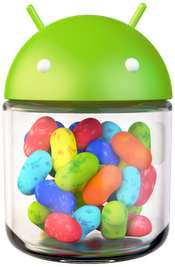 1. Notification, the difference is quite interesting from android jelly bean. Android jelly bean in the notification bar has features reply to the message, and the call feature to call the caller when a call is missed.

2. Voice commands, voice command features or Google assistant can create messages, browse the internet using voice commands. In the previous version of the android browsing using voice indeed been there, but unique in android jelly bean we can get an answer in the form of sound.

3. Face unlock, usability face unlock is for your android security, when will unlock android phone will detect your face by means of a wink.

4. Google now, this feature can provide information to the user in the form of card information, the information given for example the latest news, weather, location, etc.

5. Screen capture, useful for photographing your android screen, so the conversation SMS, android settings, etc. can be captured and distributed to social media in the form of photographs.


6. Say it offline, this feature can make your voice into a text without having to connect to the internet.

7. Smart widget, when they want to add a widget to the home screen with smart widget size and shape of the widget will automatically adjust to the available space. In addition to the widget that has been installed will be automatically shifted to gave space if it will add a new widget.

9. Full chrome, with a jelly bean Now you will feel like surfing the internet using a computer. Android Google chrome appearance in the same as in the computer.

10. Save the battery, as we know very wasteful Operating System Android especially if the battery is constantly used for internet battery will quickly run out and heat. Android jelly bean is now more able to save power.

Update : The Advantages of Android Kitkat 4.4

There are still a lot of excess android jelly bean compared to previous versions especially in terms of speed. For a while it was just what we discussed.