Motivation Theory of Needs (according to Abraham Maslow)

The most well-known theory of motivation is the hierarchy of needs theory belongs to Abraham Maslow. He hypothesized that in every man there is a hierarchy of five needs, namely physiological (hunger, thirst, sexual, and physical needs of others), security (curiosity protected from physical harm and emotional), social (compassion, ownership , acceptance, and friendship), awards (awards factors internal and external), and self-actualization (growth, achievement of one's potential, and self-fulfillment). 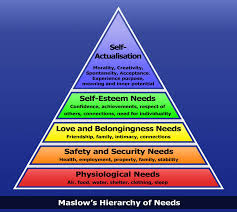 Maslow separated the five needs into sequences. Physiological and safety needs are described as lower-level needs while social needs, esteem, and self-actualization as a top-level requirements. The difference between the two levels is the premise that the top level needs are met internally while low-level needs are met predominantly externally. (Maslow. (English) A. Motivation and Personality. New York: Harper & Row, 1954, pp. 57-67.)

When food and security are difficult to obtain, the fulfillment of these needs will dominate one's actions and motives of the higher will be less significant. People will only have time and energy to pursue aesthetic and intellectual interest, if their basic needs are already met with ease. Works of art and scientific work will not flourish in a society whose members still have to bother looking for food, protection, and security.

The principle of mind Abraham Maslow departing from human needs are arranged in a hierarchy of physiological needs to the needs of self-fulfillment. Abraham Maslow stressed human behavior is caused by a specific motivation moving systematically in favor of a "grows need" or satisfying needs

According to Herzberg (1966), there are two types of factors that encourage someone to try to achieve satisfaction and keep away from dissatisfaction. Two factors were called hygiene factors (extrinsic) and motivational factors (intrinsic factor). Hygiene factors motivate a person to get out of dissatisfaction, including the human relations, benefits, environmental conditions, and so forth (extrinsic factors), while the motivational factors motivate someone to try to achieve satisfaction, which is including achievement, recognition, advancement level of life, etc. (intrinsic factor).

The theory of Achievement Mc Clelland

According to Mc Clelland (1961), states that there are three important things to be human needs, namely:

Douglas McGregor's theory X and theory find Y after reviewing how the managers dealing with employees. The conclusion obtained is about the manager's view of human nature based on certain assumptions groups and that they tend to form their behavior towards employees based on these assumptions.

There are four assumptions that managers have in theory X.

Contrary to negative views about human nature in theory X, there are four positive assumptions mentioned in theory Y.

Clayton Alderfer's ERG presents the motivation theory that is based on the human need for the presence (exsistence), relationships (Relatedness), and growth (growth). This theory is slightly different from Maslow's theory. Here Alfeder argued that if the higher needs are not or can not be met then the man will return to the flexible motion of fulfillment from time to time and from situation to situation.

Theory of Vroom (1964) on the cognitive theory of motivation explaining why a person would not do anything that he believes he can not do it, even if the result of the work was able he wanted. According to Vroom, low motivation of a person's height is determined by three components, namely:

Expectation (hope) success at a task Instrumentalists, namely the assessment of what would happen if it succeeds in doing a task (task success to get a certain outcome).

Valence, ie the response to outcomes such as feeling positive, neutral, or negative. High motivation if the effort to produce something that exceeds expectations low motivation if efforts produce less than expected

Those are some theories about Motivation that can be used as reference in thesis writing or others. Hopefully helpful.