Today SEO Anyaran will share the method is used in teaching grammar process. After read this article hopefully the readers will catch some point to add their knowledge about some method in the teaching and learning process. Below is the presentation. 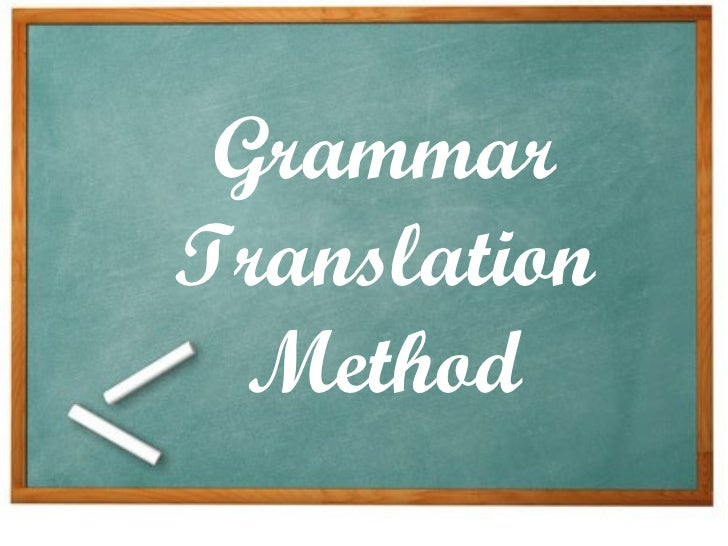 Overview
Sometimes also known as the Classical Method, this is a traditional teaching technique that was used to teach Latin and Greek and was particularly in vogue during the 16th Century. The focus at this time was on the translation of texts, grammar, and rote learning of vocabulary. There was no emphasis on speaking and listening comprehension because Latin and Greek were taught more as academic subjects rather than a means of oral communication.

Latin and Ancient Greek are known as "dead" languages, based on the fact that people no longer speak them for the purpose of interactive communication. Yet they are still acknowledged as important languages to learn (especially Latin) for the purpose of gaining access to classical literature, and up until fairly recently, for the kinds of grammar training that led to the mental dexterity considered so important in any higher education study stream

Latin has been studied for centuries, with the prime objectives of learning how to read classical Latin texts, understanding the fundamentals of grammar and translation, and gaining insights into some important foreign influences Latin has had on the development of other European languages.

The method used to teach it overwhelmingly bore those objectives in mind, and came to be known (appropriately!) as the Classical Method. It is now more commonly known in Foreign Language Teaching circles as the Grammar Translation Method.

This teaching method is still common in many countries and institutions around the world, and still appeals to those interested in languages from an intellectual or linguistic perspective. However, it does little to improve your ability to use the language for oral communication.
It is hard to decide which is more surprising - the fact that this method has survived right up until today (alongside a host of more modern and more "enlightened" methods), or the fact that what was essentially a method developed for the study of "dead" languages involving little or no spoken communication or listening comprehension is still used for the study of languages that are very much alive and require competence not only in terms of reading, writing and structure, but also speaking, listening and interactive communication. How has such an archaic method, "remembered with distaste by thousands of school learners" (Richards and Rodgers, 1986:4) persevered?

It is worth looking at the objectives, features and typical techniques commonly associated with the Grammar Translation Method, in order to both understand how it works and why it has shown such tenacity as an acceptable (even recommended or respected) language teaching philosophy in many countries and institutions around the world.

Objectives
Most teachers who employ the Grammar Translation Method to teach English would probably tell you that (for their students at least) the most fundamental reason for learning the language is give learners access to English literature, develop their minds "mentally" through foreign language learning, and to build in them the kinds of grammar, reading, vocabulary and translation skills necessary to pass any one of a variety of mandatory written tests required at High School or Tertiary level.

Some teachers who use the method might also tell you that it is the most effective way to prepare students for "global communication" by beginning with the key skills of reading and grammar. Others may even say it is the "least stressful" for students because almost all the teaching occurs in L1 and students are rarely called upon to speak the language in any communicative fashion.

More conservative teachers from more conservative countries are even likely to be put out by anyone merely questioning the method, and a typical response could be "because that's the way it's always been done - it's the way I learned and look, now I'm a professor". The point being, the method is institutionalized and considered fundamental. Such teachers are probably even unware that the method has a name and can be compared alongside other methods.

Key Features
According to Prator and Celce-Murcia (1979:3), the key features of the Grammar Translation Method are as follows:
Typical Techniques
Diane Larsen-Freeman, in her book Techniques and Principles in Language Teaching (1986:13) provides expanded descriptions of some common/typical techniques closely associated with the Grammar Translation Method. The listing here is in summary form only.
That's my explanation about GTM (Grammar Translation Method). You can use this method to increase your students ability in Grammar Translation. But, we are as the tutor, teacher, or lecturer have to consider that there are some language that can not be translated to other language. So, if your students find those words and find the difficulties to translate them, you can anticipate this situation. Ok, Hopefully this article can be give us some points of view to increase our students' achievement especially for Grammar Translation and for teachers or lecturers, this method can be used as the reference to improve their style and their competence in teaching grammar process.