Hortatory Exposition and Its Characteristic

Hortatory exposition is a text which represent the attempt of the writer to have the addressee do something or act in certain way. 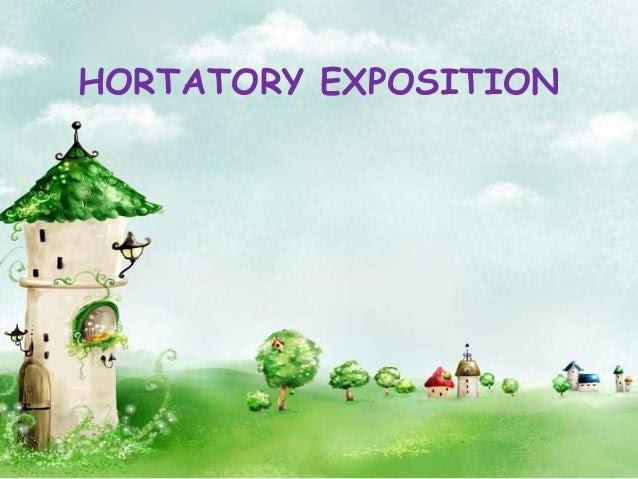 Examples and structures of the text

Watch your Kids While Watching TV

Television becomes one of the most important devices which takes place in almost houses. It can unite all members of the family as well as separate them. However, is it important to know what your kids are watching? The answer is, of course, absolutely “Yes” and that should be done by all parents. Television can expose things you have tried to protect the children from, especially violence, pornography, consumerism and so on.

Recently, a study demonstrated that spending too much time on watching TV during the day or at bedtime often cause bed-time disruption, stress, and short sleep duration.

Another research found that there is a significant relationship between the amount of time spent for watching television during adolescence and early adulthood, and the possibility of being aggressive.

Meanwhile, many studies have identified a relationship between kids who watch TV a lot and being inactive and overweight.

Considering some facts mentioning above, protect your children with the following tips:

Notes on the Generic Structure of this Hortatory Exposition example
Firstly, we have to always remember that the social function of hortatory exposition text is driving the readers to act like the writer thought as stated in the text. Then the purpose of this hortatory is influencing and persuading the readers by presenting the supporting arguments. In many social activities, hortatory is applied for writing recommended thought, sales letter, advertising, speech campaign, and news advertorial.

Thesis: The writer’s thought is presented as thesis which is proven with several arguments. In the first paragraph, the writer points his thought about the importance of accompanying children while they are watching TV show. It is important to protect the children from the bad influences of TV show.

Arguments: The next paragraphs show the writer arguments in supporting his thesis. It is supported by various researches that there are a great relationship between watching TV and the watcher’s personality. One study describes that much time in watching TV can cause bed-time disruption. The others show the possibility of becoming an aggressive character because of watching television too much.

Recommendation: After stating the thesis and proving with various arguments, the text is completed with the writer’s recommendation on how the parents should protect the children from the bed effect of watching TV.