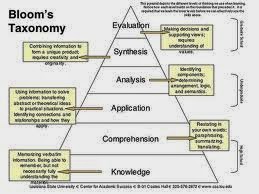 Cognitive Domain
Intellectual learning outcomes reveal that mental activity often begins from the lowest level(knowledge) to the highest level, that is evaluation. There are six levels of cognitive domains or areas. They are knowledge, comprehension  (understanding, explaining, summarizing, example), application, analysis (outline, define the relationship), synthesis (organizing, planning, forming the new building), and evaluation (judging). They will be explained more clearly about the level of cognitive aspects which is based on Sutikno (2013):

a. Level of knowledge (C1)
At this level the learner is required to recall prior information they have received, such as facts, formulas, and problem-solving strategies. Learning outcomes of this level is the students are able to mention, apply, analyze, and synthesize.

b. Level of Comprehension (C2)
This level deals with the ability to explain the knowledge and information that has been known to use their own language. Learning outcomes of this level is the students are able to explain, elaborate, formulate, summarize, modify, and predict.

c. Level of Application (C3)
This level is the level of ability to use or apply the information learned to a new situation, and solve the various problems that arise in their daily life. Learning outcomes of this level are the students are able to compute, connect, equip, produce, supply, and adjust.

d. Levels of analysis (C4)
This is the level of students' ability to identify, separate, and distinguish the concepts, opinions, assumptions, hypotheses and others. In this level students are expected to demonstrate the relationship between the ideas by comparing the idea with the standard principles that have been learned. Learning outcomes in this level is the students are able to separate, choose, compare, connect, share,  and create.

e. Level of synthesis (C5)
The synthesis level is the ability of students to associate and unite the various elements and elements of existing knowledge to form a new pattern that is more thorough. Learning outcomes in this level is the students are able to categorize, organize, compose, design, conclude, and make a pattern.

f. Level of evaluation (C6)
This level is the highest level of the cognitive domains. At this level, students are expected to make judgments and decisions about assessing an idea, method, product or object. Learning outcomes in this level are the capability of the learners to criticize, evaluate, interpret, differentiate, discuss, and elaborate.

2. Affective Domain
With regard to the attitude, the receiving (acceptance), responding (response or feedback), valuing (value), organization (organization). Description affective objectives that are part of the taxonomy Blomm. Four stages / levels of the affective domain can be to measure the attitudes of learners / students during learning activities take place. They are:

a. Acceptance or Receiving
The process of the formation of attitudes and behaviors in a way to raise awareness about the presence of a particular stimulus. In learning activities, the shape of the attention, maintain, direct, ask, choose, replied, continued, stating, putting (Hamdani, 2010)

b. Responding
An active participation of students, who are part of the behavior. Change / participation / response / feedback are influenced by the presence of stimuli or stimulus, in other words, the response or feedback is due to the stimulus or stimulus. Learning outcomes at this level is helpful, reporting, opinion donated, volunteered, practicing, eager to respond, response and satisfaction in giving approve. Highest level of this category is interest, ie the things that highlight the specific activity of pleasure.

c. Valuation
It can be interpreted as an admission assessment objectively (honestly) that the student is objective, system or object that has the benefit levels. It can also be interpreted as a willingness to accept an object or after a person is aware of the fact that the object has a value or power, by stating in the form of attitude or positive or negative behavior. Learning outcomes in this level are the students able to demonstrate, select, reject, encourage, defend, and justify.

d. Organization
Organization is defined as the combining of different values, resolving conflicts among them, and establish a consistent value system. Learning outcomes at this level is that students are able to formulate, to associate, organize, change, complete, perfect.

Then, according to Jihad (2009) affective domain consists of five aspects. They are receiving, responding, valuing, organization and characterization. They will be explained clearly below.

c. Responding
Responding here is willingness to make a selection of a value of the stimulus. The words used in this level is acknowledged with sincere, identify themselves, trust, unite themselves, want, want, faith, aspires ambition, discipline, self dedication, willing sacrifice, responsibility, confident, and resigned.

d. Organisation
Organisation here is willingness to organize the values  chosen to be established guidelines in behavior. The words used in this level are to weigh, establish and develop the system.

e. Characterization
Characterization here is make the values that are organized not only for a code of conduct but also become a part of the personal behavior in everyday. The words used in this level is to be objective, thoughtful, fair, firm in the establishment, personality.

3. Psychomotor Domain
Psychomotor domain related to skill and act ability of students’ achievement. Psychomotor region oriented motoric skills that associated with members of the body, or action that requires coordination between nerves and muscles. The example of psychomotor domain in English lesson is students are able to create genre or short functional text. Another example is students can perform role play in English drama.
Sutikno (2013) states there are four hierarchies of psychomotor, they are: (a) Imitation, it is the ability of the leearners to practice what they heve noticed before. (b) Manipulation, it means the skill that is related to the modification skill of something. (c) Precision, means the capability of the learners that shows the proficiency in doing something difficult. (d) Articulation , means the capability of the learners to do an activity that is coordinated and efficient.