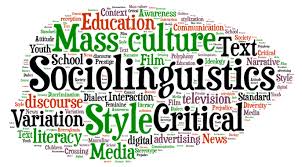 According to Brumfit (1997) on Davies and Elder (2004: 23), applied linguistics is an activity theoretical and scientific investigation of the real problems in which language as the main problem. Meanwhile, according to Schmitt and Celce-Murcia (2002) by Davies and Elder (2004: 24), applied linguistics as an activity using what we know about (a) language, (b) how language is learned, (c) how the language is used, with the aim to obtain a solution or solving problems in the real world.

According to Hudson (1996) through Wardhaugh (2006: 13), sociolinguistics is a study of the language with the community. Sociolinguistics discuss relationships with speakers of the language as a member of the public who associate the function of language as a means of communication in society. In other words, sociolinguistics an interdisciplinary science, which is between sociology and linguistics that have a very close connection. This is due both are almost inseparable influence on the process of implementation of communication activities in the community.

Already a general truth that all communication activities related to a device called a language. No exception is also in the realm of education, relation to language teaching. In this article will discuss the relation Sociolinguistics (as one of the disciplines that involve the community in the implementation of its linguistic activity) and teaching (as one example from the field of linguistic studies, which applied linguistics).

Sociolinguistic study is very wide, even when tuition for one semester is also it's not going to be enough to discuss this sociolinguistic study. It is true, a statement that was never delivered by Prof. Pratomo that "So much material that should be known within a very, very limited."

In addition, the implementation of language teaching must take into account the community environment where language teaching takes place. This may be the influence that may arise as a reciprocal relationship between native language (mother tongue) and language students are taught. No less important is to consider the obstacles that may arise as a result of the influence of the mother tongue and attempt to minimize these obstacles.

Language teaching should pay attention to the target to be achieved by the teaching of the language. As the implications of these understandings can be actualized in the curriculum and syllabus of language learning, for example, the process of learning and teaching in English class. The following are examples of areas of sociolinguistic study that appears in the process of teaching and learning in English class.

One part of the simple codes (simple code) associated with the use of language in the classroom is teacher-talk. Krashen (2002: 121) states that there are three aspects that are included in the simple codes, ie teacher-talk, foreigner-talk, and Interlanguage-talk. Teacher-talk is the language used by teachers in the classroom; foreigner-talk is a conversation conducted native speakers; and Interlanguage-talk is a conversation conducted by pemeroleh another second language.

In addition to relating to teacher-talk, teaching English also reflects another part of the study sociolinguistics, ie code-switching and code-mixing. Code-switching (of code) are commonly used English teachers and students in the classroom in the learning process that may arise due to changes in the situation that requires you to make the switch code, misalanya of code 1 (English) to code 2 (Indonesian) . Events over the code (code-switching) may occur, either because the factors of socio-situational.

Mixed code (code mixing) occurs when a language speakers, for example, in situations in English class, the speakers incorporate elements of Indonesian or regional language into English conversation classes. In other words, someone who spoke English with the main code (for example, in a class of English education majors who use English as the language of the introduction) which has the function as autonom, while the Indonesian code or language areas involved in the main code fragments without function as a code. Prominent features in the mixed code is your relaxation or informal situations. In formal speaking situations, rare mix of code, in case of mixed code in that state because there is no exact word or phrase to replace the language that is being used.