Correlation Research and Its Characteristics 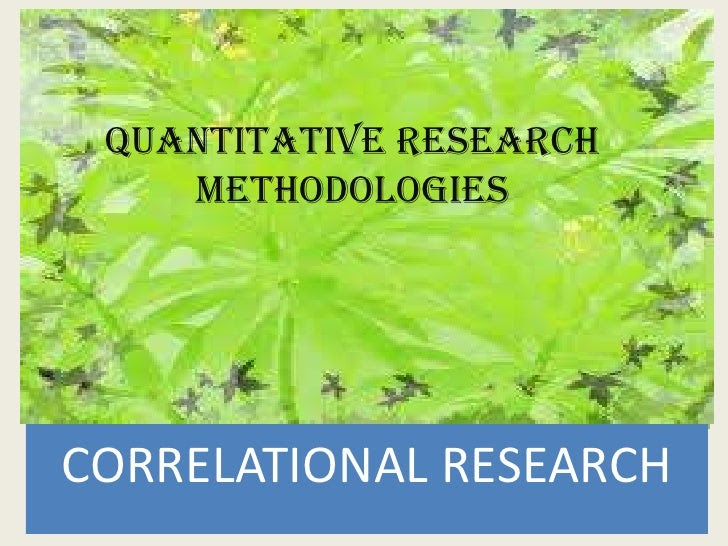 According to Gay in Sukardi (2004: 166) correlation study is one part of the ex-post facto research because researchers usually do not manipulate the state of a given variable and directly search for the existence of a relationship and the level of variable relationships are reflected in the correlation coefficient. Furthermore, Fraenkel and Wallen (2008: 329) mentions the correlation research into the study because it represents a description of the business describe conditions that have occurred. In this study, researchers sought to describe the current conditions in the context of quantitative reflected in the variable.

Correlation research conducted in various fields including education, social, and economic. This study is limited to the interpretation of the relationship between variables was not up on causality, but this research can be used as a reference for future research as experimental research (Emzir, 2009: 38). According to Sukardi (2004: 166) correlation study has three important characteristics for researchers who want to use it. Three characteristics are as follows. Appropriate if the correlation study of complex variables and researchers impossible to manipulate and control variables as in the experimental study. Allows intensively measured variables in the setting (environment) real. Allows researchers to get a significant degree of association.
Correlational Research Objectives

Correlational research purposes based on Suryabrata (in Abidin, 2010) is to detect the extent to which variations in the factors associated with variations in one or more other factors based on the correlation coefficient. Meanwhile, according to the Emzir Gay (2009: 38) The purpose of a correlational study was to determine the relationship between variables, or to use these relationships to make predictions. Studies investigating the relationship is usually a number of variables that reliably associated with a major variables, such as learning outcome variables did not have a high correlation eliminated from further attention.

The Characteristics of Correlational Research

Here are the characteristics of Correlation research:

This following explanation is about kinds of correlation research, here are:

Basically, the design of the study of this relationship is quite simple, and only had to collect a score of two variables of the same group of subjects and then calculate the correlation coefficient. Therefore, in this research, the researcher first pair of variables that will determine the level of relationship investigated. The selection of these two variables should be based on the theory, assumptions, the results of research that preceded, or experience that both are probably related.

In the implementation in the field of education, many situations that require doing prediction or forecasting. At the beginning of the new academic year, for example, every school because of limited facilities, often have to select the applicants who will be admitted to prospective students.

This kind of correlation study focuses on the measurement of one or more variables that can be used to predict or predict events in the future or other variables (Borg & Gall in Abidin, 2010). This study as relational research, involving the calculation of correlation between a complex pattern of behavior, namely the variable target prediction or forecast of events (called criteria), and other variables thought to be related to the criteria, the variables used to predict (called predictor ). The technique used to determine the level of prediction between the two variables is a regression analysis technique that produces the regression coefficient, which is denoted by R.

Techniques to measure and investigate the degree of relationship between the combination of three or more variables called multivariate correlation techniques. There are several techniques that can be used, two of which will be discussed here are: double or multiple regression regression and canonical correlation.

Correlational research has various types of design. Shaughnessy and Zechmeister (in Emzir, 2009: 48-51), namely:

If there is a correlation between the two variables and we know the score on one variable, scores on both variables can be predicted. Regression refers to how well we can make this prediction. As good correlation coefficient approach -1.00 or +1.00, we can better predictions.

This statistical procedure identifies existing variable pattern. A large number of correlated variables and a high correlation between the presence indicates an important factor that is common.

There are two designs that can be used to make statements about the causes and consequences of using the correlation method. The design is the design of path analysis (path analysis design) and cross-end panel design (cross-lagged panel design). Path analysis is used to determine which of a number of paths that connect one variable to another variable. While the design of the final cross panel measuring two variables at two points simultaneously.

This design involves the use of complex mathematical procedures / complicated to determine the dynamic processes, such as changes over time, as well as the feedback element meshes and flow relationships.

Basically, correlation studies involving the calculation of the correlation between the complex variables (variable criteria) with other variables that are considered as bonafit relationship (predictor variables). Measures proficiency level this study are generally in Mc Milan and Schumaker (2003), namely the determination of the issues, problems or literature review, research question or hypothesis, research design and methodology of the study, data collection, and data analysis, conclusion.

Dewey (in Shamsuddin and Vismaia, 2009: 42) states the problem in research is a gap between what is expected by the fact that there is or something that made the targets set by the researchers, but the target is not reached. In each study the first step to do research is to determine the research problems that will be the focus of his studies. The characteristics of the problem worth studying is that can be researched (researchable), have contributed or kebermanafaatan for many parties, can be supported by empirical data and the corresponding ability and willingness of researchers (Sukardi, 2004: 27-28). In a correlational study, issues selected should have significant value in the behavior pattern of a complex phenomenon that requires an understanding. In addition, the variables included in the study should be based on consideration, both theoretically and reason, that these variables have a certain relationship. This can usually be obtained based on the results of previous studies.

2. A review of problem or Library Studies

After determining the problem, an important research activity is the study of literature that became the foundation for obtaining the basic theory, framework and determination of provisional estimates so that researchers can understand, allocate, organize, and use the variation in the library field. Various sources to obtain the theories related to the problem under study is of journals, research reports, scientific magazines, newspapers, books relevant, results of seminars, scientific articles and sources.

The study design or At this stage the researchers determined that the research subjects will be selected and determine how the data processing. Subjects were recruited for this study must be measured in the variables that are the focus of research. The subjects to be relatively homogeneous in factors outside the studied variables that may affect the dependent variable. When the subjects involved have significant differences in these factors, the correlation between the variables studied are becoming blurred. To reduce the heterogeneity, the researcher can classify subjects into groups based on the level of certain factors and then examine the relationship between the study variables for each group.

Various types of instruments can be used to measure and collect data of each variable, such as questionnaires, tests, interview guidelines and guidelines for observation, of course, tailored to the needs. Data collected by these instruments should be in the form of numbers. In a correlational study, the measurement variables can be done in a relatively equal. Being in predictive studies, the predictor variables should be measured over a period of time before the criterion variable occurs. If not, then a prediction of these criteria is meaningless.

5. Analysis of the data

Basically, the analysis in a correlational study done by correlating the results of measurement of a variable with another variable measurement results. In a correlational study, bivariate correlation technique, according to the type of data, used to calculate the degree of relationship between variables with one another. Being in a predictive study, the technique used is the regression analysis to determine the level of predictive capability predictor variable to variable criteria. However, it can also be used when the normal correlation analysis involves only two variables. When involving more than two variables, for example, to determine whether two or more predictor variables can be used to predict the criterion variable is better than when used individually, multiple regression analysis techniques, multiple regression or canonical analysis can be used. The results of this analysis are usually reported in terms of the coefficient of correlation or regression coefficients and significance levels, in addition to the proportion of variance contributed by the independent variable on the dependent variable. Interpretation of the data in a correlational study is when connecting the two variables will produce correlation coefficient with the symbol (r). The relationship of these variables declared with the value of -1 till +1. Value (-) indicates negative correlation conflicting variables and values (+) indicates a positive correlation approach each other variables in the same direction (Syamsudin and Vismaia, 2009: 25).

It contains the results of the analysis of the description and discussion of the research by using easily understood reader briefly.