Vocabulary is one of the important parts in learning language skills. Without vocabulary, it is impossible to make sentences in communication. Concerning with statement above, Malay (in Hidayati: 2007) states that through vocabulary we can communicate ideas, emotions, and desires. It would be impossible in learning language without vocabulary, without words. Words are best in learning English subject. Young learners need to start using the words in the lesson and trying to understand the teacher when teacher uses the new words. The most important goal for the teacher is to develop students’ independence in learning word and meaning in the context. It will enable to take more active in their vocabulary development. The students get vocabulary from the environment. The environment extends in time including books, radio, television, and internet. “Acting out the meaning of words and seeing pictures help the children learn new word in a fun way” (Gerlach 1980 : 247). 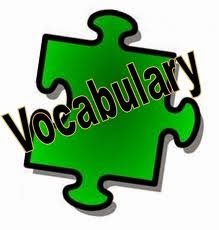 In this time, the writer will discuss about definition of vocabulary.

Definition of Vocabulary
There are definitions of the vocabulary given by the expert. Hatch and brown define vocabulary as a list or set of words that individual speakers of language might use (Hatch and Brown: 1995). Vocabulary is a list of words, which make up the language. As stated in Oxford Advanced Learner’s Dictionary (page 461) that vocabulary is the total number of words in language. Penny Ur defined that vocabulary is one of the important aspects in teaching a language, beside grammar and pronunciation. As a stock of words used by a person, vocabulary can be defined roughly as the word we teach in foreign language. (Penny Ur: 1996). Vocabulary is commonly defined as "all the words known and used by a particular person". (Wikipedia, the free encyclopedia).

While Harimurti Kridalaksana says that vocabulary is a component of a language that maintains all informations about meaning and using words in a language (Harimurti Kridalaksana : 1993).Besides mastering grammar, the English learner must have the save of many vocabularies because the amount of vocabularies had by the learner influences the ability to produce in English sentence than poor of vocabulary. Words are the basic unit of language form.  Without a sufficient vocabulary, one cannot communicate effectively or express idea. Having a limited vocabulary is also a barrier that prevents students from learning a foreign language. If learners do not know how to expand their vocabulary, they gradually lose interest their learning (Yang Zhihong: 1990). And Robert Lado defined vocabulary as means the memory of situation in which they have been observed and understood. (Robert Lado : 1974). It means that to know a word is to use it or to understand in situation in which the person has not experienced it before.

Words regarded as most important part in learning language. Related to that matter McCharty, quoted from Vermeer stated Knowing word is the key to understanding and being understood. The bulk of learning a new language consists of learning words. Grammatical knowledge does not make a great proficiency in a language. (McCarty ,Vermeer : 1997).

According to Merriam Webster’s Collegiate Dictionary (1983) vocabulary is:
a) A list of words or phrases, abbreviation inflectional form etc. Usually arranged in alphabetical order defined or otherwise identified as in dictionary or glossary.
b) An interested group of non-verbal symbols, signs, gestures,etc. Used for communication or expression in a particular art, skill etc.